Eaton County, named for President Andrew Jackson's Secretary of War (John Eaton), sometimes referred to as a cabinet county, was organized in 1837. Due to lack of population and buildings in the designated county seat (Charlotte), government and judicial functions were performed in the village of Bellevue. However, by 1840 the population of Charlotte had grown sufficiently to warrant the move to this community.

By 1880, growth in Eaton County had outstripped the capacity of the first courthouse. In 1882 the Eaton County Board of Supervisors resolved "to erect a building for court and public office purposes" at no more than $50,000 cost; this was later amended to $40,000. When completed, the cost of this courthouse was nearly $80,000.

The contract for design was awarded to D.W. Gibbs and Company of Toledo, Ohio with the firm of Miles, Cramer and Horn also from Toledo doing construction. The corner stone was laid on July 4, 1883 and this building was ready for use in October 1885. Placed on the register of national historic buildings, the courthouse served the residents of Eaton County as the focal point of County Government for nearly ninety-one years.

During the late 1960's the county again experienced a tremendous population growth. As a result, the Courthouse of 1885 could no longer house the rapidly expanding County government. Late in 1970, the commissioners began in earnest discussing the need for more space. Several options were weighed; they included building additions on to the present Courthouse, purchasing land surrounding the courthouse annex buildings or the purchasing of land and developing a governmental complex within that area.

Advantages and disadvantages were weighed for each option; however, after months of discussion the final proposal of developing a governmental complex was accepted. With the decision to build a new Courthouse complex the firm of Cain and Associates of Kalamazoo were retained for architectural work on the new building, the TerHorst and Rinzema Construction Company of Grand Rapids as general contractors.

Ground breaking ceremonies for the courthouse were held January 24, 1975, with the building being dedicated on July 4, 1976. This new building was designed to include sixteen county offices and departments, encompassing 87,700 square feet of office and storage space and costing close to $4,000,000 total. The building was constructed without the need for assessing additional taxes upon the residents of Eaton County. The new Courthouse complex typifies the growth development of Eaton County as it moves toward the 21st century. - Douglas C. Kelsey, Eaton County Bicentennial Commission

Eaton County's first Courthouse was moved from the Courthouse square in 1872. It Served as a garage until purchased by Historic Charlotte, Inc. and moved to Bennett Park in 1983 where restoration is in progress. 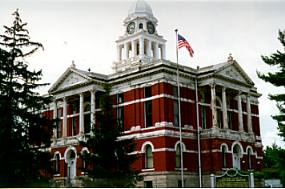 The Renaissance Revival structure with its walls of sandstone and brick is Eaton's second County Courthouse and is undergoing restoration. 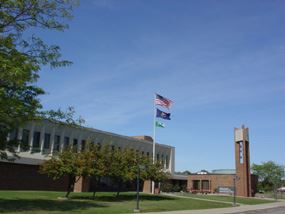