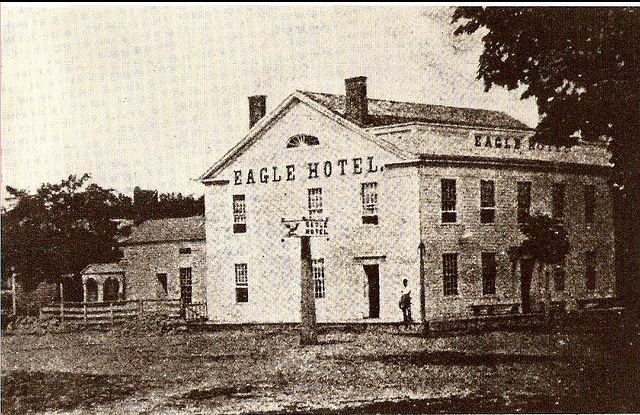 The early settlers were not all saints. Some black sheet got in among the flock at an early day, or some unable to withstand temptation, and it was occasionally found necessary to exercise restraint. Bellevue at an early date was practically the county seat of the county. Some of the settlers, who were boys in those days, tell us that a man from that place who was sent to buy goods skipped out with the money, but was pursued, brought back and was confined to a room in a large building called "The Arsenal" The window was grated, but was not regarded as very strong, so an iron band was fastened around the waist of the prisoner, to which a strong chain was attached, and the other end made secure. The boys used to go to the barred window and look in to see the prisoner in chains. He was on hand, however, when wanted for trial. This was the initial movement in the community in the handling of the criminal class.

The Eagle Hotel had two rooms reserved as jail cells

The county commissioners at their session in 1841 passed the following: Resolved to allow William Stoddard twenty-five dollars per year, for five years, from the 15th day of May next, as rent for two rooms, each fifteen feet by twelve square, with sufficient fireplaces or stoves to warm the same; said rooms to be sufficiently secure for a jail; that when the county shall have no use for said rooms as a prison or jail, said Stoddard shall have the use of said rooms gratis; provided said rooms are read 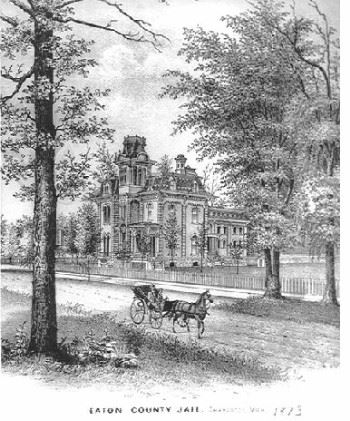 y for use by the first day of the circuit court for the county of Eaton next. And the commissioners further resolve, that twenty-five dollars of said rent is to be paid to said Stoddard in advance, as soon as he shall have the body of said building erected.

But during the year 1842 it became evident that some more secure place must be provided for prisoners, and in September the supervisors appointed William Stoddard, Alonzo Baker, and A. D. Shaw a committee to draft a plan for a jail, and receive proposals for building the same, and submit them to the board for approval. In January, 1843, the subject was again taken up, and it was finally resolved to submit the question to the people at their coming town meetings. Before the session closed, the sum of four dollars was allowed to W S Fairfield for building a temporary jail, which must indeed have been an imposing affair. In July, 1843, William Stoddard was allowed five dollars for furnishing jail. At this time Austin Blair, afterwards governor of the state was clerk of the board.

In the fall of 1846 the committee presented plans for a jail of hewn timber, and it was resolved that the county proceed to build one after the plans submitted, out of funds due the treasurer and not otherwise appropriated, and the building was to be ready by September 1, 1847. This jail was a long two story building, the jail proper being in the eastern end, while the western end was the sheriff's residence. The jail part was made of hewn hardwood timber about ten inches square, set on end and fastened together with dowel pins, the floors and ceiling were made of the same materials and fastened in the same manner. There were two cells about ten by fifteen feet square, with a hallway between them and above them was a single cell designed for women, but which appears not to have been very popular as it was little used. The building was small and cost but a few hundred dollars; it stood very nearly on the ground occupied by the present jail and was used until it was entirely unfit for its purpose.

In 1867 at the January session of the supervisors, they resolved to submit to the voters of the county, on the first Monday of the following April, a proposition to raise eight thousand dollars for the purpose of building a jail and a house for the jailer, one-half to be raised in the year 1867 and the other half in the year 1868. The voters refused to sanction the tax.

A month later at the October session of the supervisors in 1868 Mr. Lawrence presented to them a diagram of the public square and proposed that they release to him the public square on which the court house stands, and the lot on which the brick office of Dr. Rand and the commissioner of the poor now stands, and in return he would deed to the county residuary interest in the lots marked on the diagram jail lot, and court house lot, and the buildings thereon and also that he would give the county the sum of $8,000 towards the erection of a new court house with county offices attached to be located on the aforesaid square, $4,000 to be paid without interest, when such building or buildings are entirely completed, said building or buildings to cost not less than $8,000. This diagram has disappeared, and the offer was not accepted, for in 1871, Mr. Lawrence offered to release to the county his interest in the west half of the public square, and pay the county the sum of $12,000; provided the county transferred to him its interest in the east half of the said square, and the lot four in block 24 on which the offices of the county treasurer and register of deeds are located. This offer was accepted by the supervisors; provided the preliminaries could be satisfactorily adjusted. A committee consisting of Osmum Chappell, Earl T. Church, and John Dow, was appointed to negotiate and make the sale, on certain conditions, which cover more than a page of the records. From the fact that among these conditions is one that provides that two alleys twenty feet in width shall be reserved, one from the middle of the square on Harris avenue, and the other from the middle of the square on Bostwick avenue to intersect each other in the center of the square, we conclude that Mr. Lawrence first offer was to give $8,000 for three quarters of the square and the lot on which Dr. Rand office stands, and he would transfer to the county his residuary interest in the northwest quarter of the square. As we find no further record of his second proposition, we conclude that the preliminaries could not be satisfactorily adjusted, and the whole fell through.

At the January session in 1870, the supervisors resolved that the proposition for raising by tax, fifteen thousand dollars for the purpose of building a jail and jailerï¿½s residence for the county of Eaton, he submitted to the voters on the first Monday in the following April. The result showed that the voters did not approve of this tax. There was evidently some misunderstanding the confusion in the votes cast, therefore the supervisors resolved to submit the proposition to the voters again in April, 1871. This time the proposition was carried by a majority of one thousand five hundred and fifty-two of the electors. E T. Church, E S Lacey and A. D. Shaw were appointed a committee to secure plans and specifications for the jail and jailers residence. These gentlemen were subsequently made the building committee, and under their supervision the present commodious and elegant building was erected. It was completed in 1873. It is built of red brick in tasteful style, and the first cost was about $ 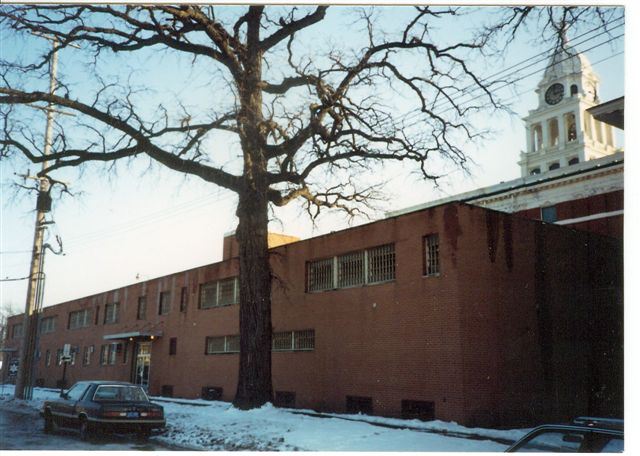 16,000. A few years later, a steel lining was put on the inside of the walls. A year ago a steel cage about ten by sixteen feet square was built in the upper story of the jail. In it were placed bunks for four prisoners and it was thought to be secure. The first night it was used three men were put in and all were outside the jail in the morning; since then two have been put in and they were out before morning.

In 1886 it was necessary to remodel the jail and a 25-foot extension was added to both floors. Again, in 1947 Myron Rogers of Chester Township remodeled the living quarters and office section. In 1949 Clark Construction Company of Grand Ledge remodeled the jail with steel windows and frames installed.

In 1961 a new jail and Sheriff's residence was constructed at a cost of $400,000 on the east side of the 1873 jail. This jail was a strong two-story brick, concrete and steel building. The jail was built to house 61 inmates. The architect was C 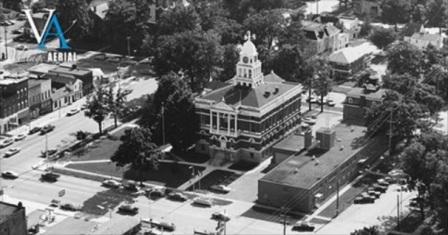 hris King of Vermontville and the builder was H.T. Graham of Lansing.

In 1987 Eaton County voters passed a millage for the existing Eaton County Sheriff's Office located at 1025 Independence, Charlotte, Michigan next to the new County Courthouse. The Sheriff Department was in operation in July of 1989 and inmates were moved into the jail in January of 1990. The current jail facility is capable of holding 225 inmates and has been planned so that it can be enlarged. Currently the average inmate population is 198 prisoners. 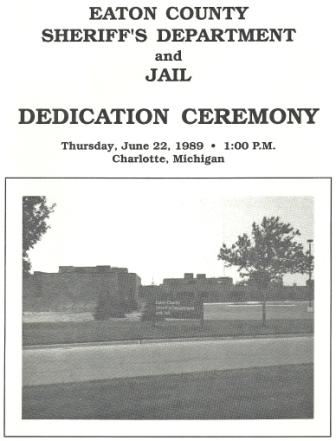 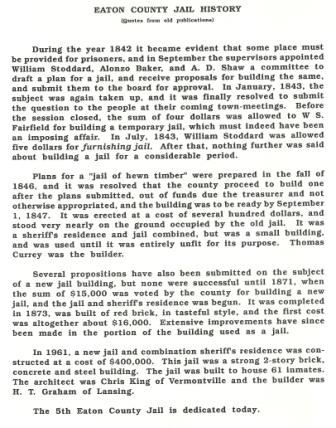 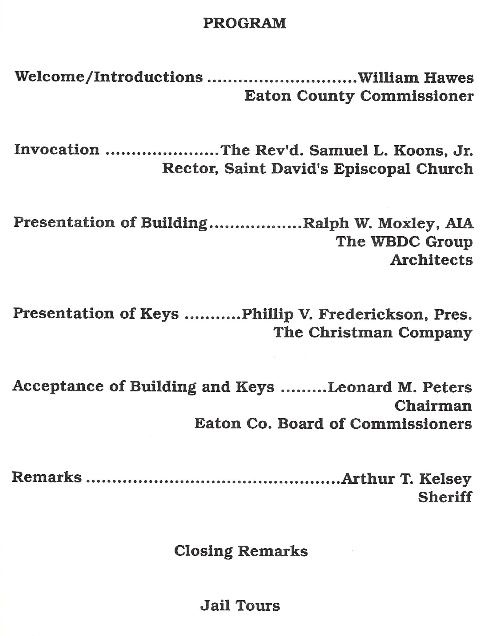 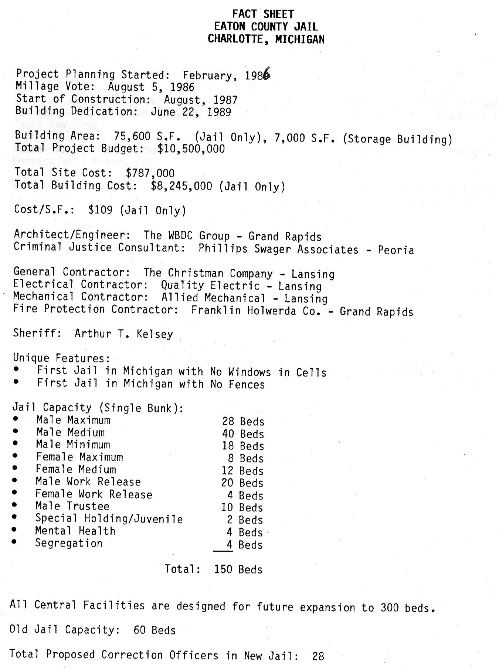 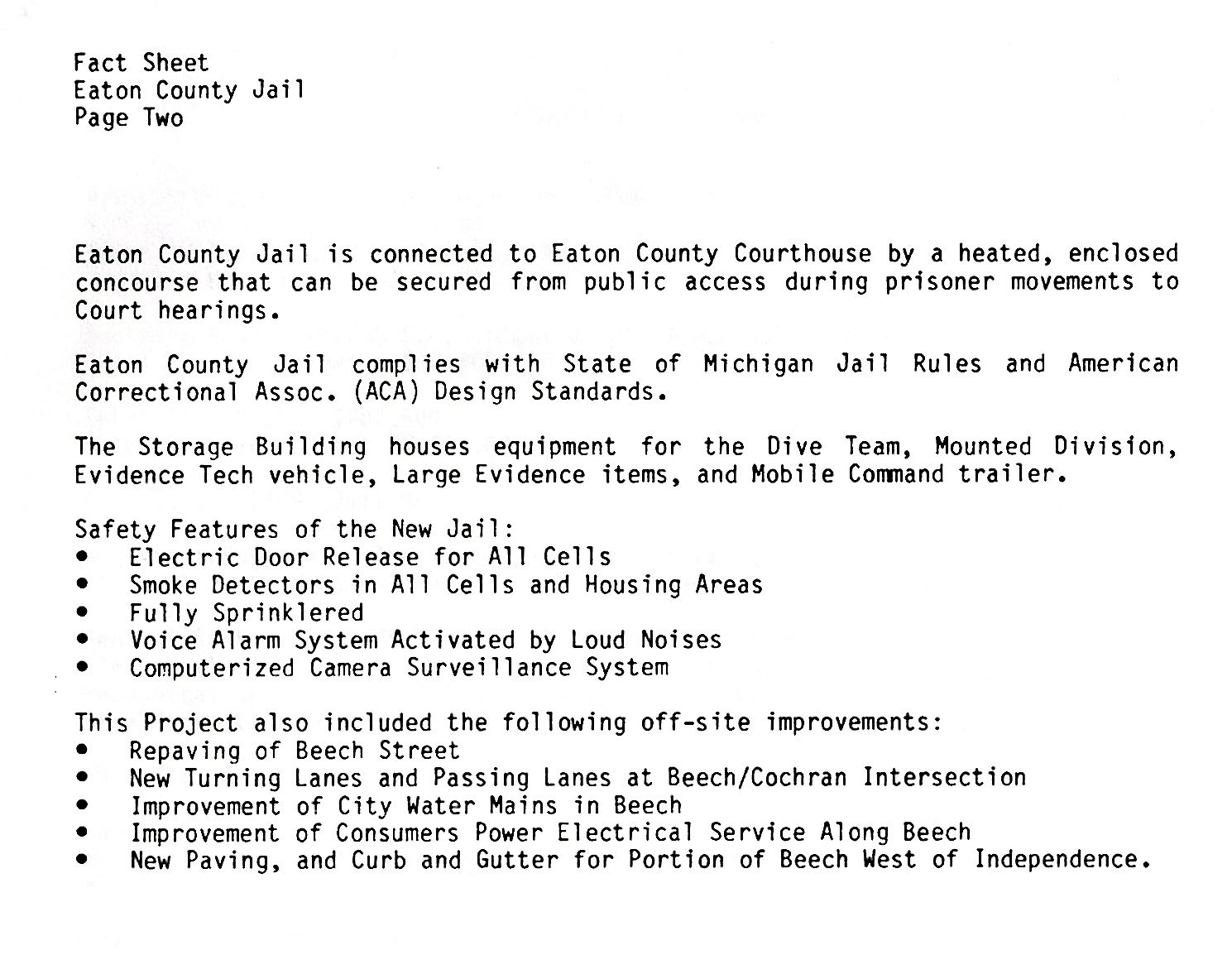 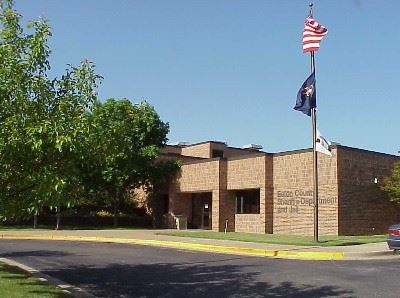 In 2006, Eaton County voters passed a millage renewal to expand the Jail to include an additional 142 beds. The Groundbreaking Ceremony took place on June 20, 2007. 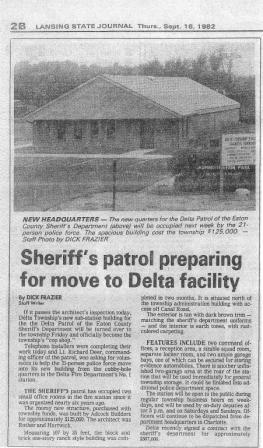